The Hallmark Movie Channel took one of our very own North Country Flyers song penned by Brian Cole with Megan Sloane Linville and Nashville producer Mark Oliverius....
for the November and December Movie... the Movie is called "Snow Bride" starring Patricia Richardson.... the song is called "Wrapped up in love... They played the movie 17 times last year...

"One Good Ride" was just picked up by a major TV show.

2014 is starting off with a bang. Our song "One Good Ride" was just picked up by a major TV show. Details coming soon.....

Ohh.. ya, I am going to sleeping in this one.

If you use RHAPSODY for your Radio station you can now here our new single Southern Girl here is the link
http://www.rhapsody.com/artist/mockingbird-hill/album/southern-girl

Just wish it was even closer but good things come when you wait.

Good Monday morning...wishing each and every one of you a blessed day!

count down to recording yay..

Going through everything and organization. Getting this ready. Almost there...........yay..

GREETINGS TO ONE AND ALL...JUST A NEW EDITION TO 'NASHVILLE UNIVERSE'...I'VE UPLOADED 4 SONGS AND 1 VIDEO SO FAR...GIVE US A LOOK-SEE/LISTEN...THIS HERE STUFF IS TOTALLY DIFFERENT FOR THE MOST PART...GLAD TO BE HERE...LOOK FORWARD TO INTERACTING WITH ALL OF YOU...T/F/S...

Shopping for generic drugs and that too online comes with an added advantage of effortless and secure shopping. Pillsincart is one of the best online pharmacies with plethora of medicines in stock to suffice the needs of the customers of all kinds. You can buy in bulk or for personal purpose, from this trusted online pharmacy. It is mainly a retail internet pharmacy with excellent shipping service which is driven for customer satisfaction.

Generic medicine without prescription is not…

Everyday getting closer to a goal. The more your doing the more you know its closer to your goal. *

YES YES YES i'm nominated for the CCR Country Music Award 2014
was Entertainer of the Year 2013 Award in the same competion
http://www.clayscountry.com/2014nominees.php 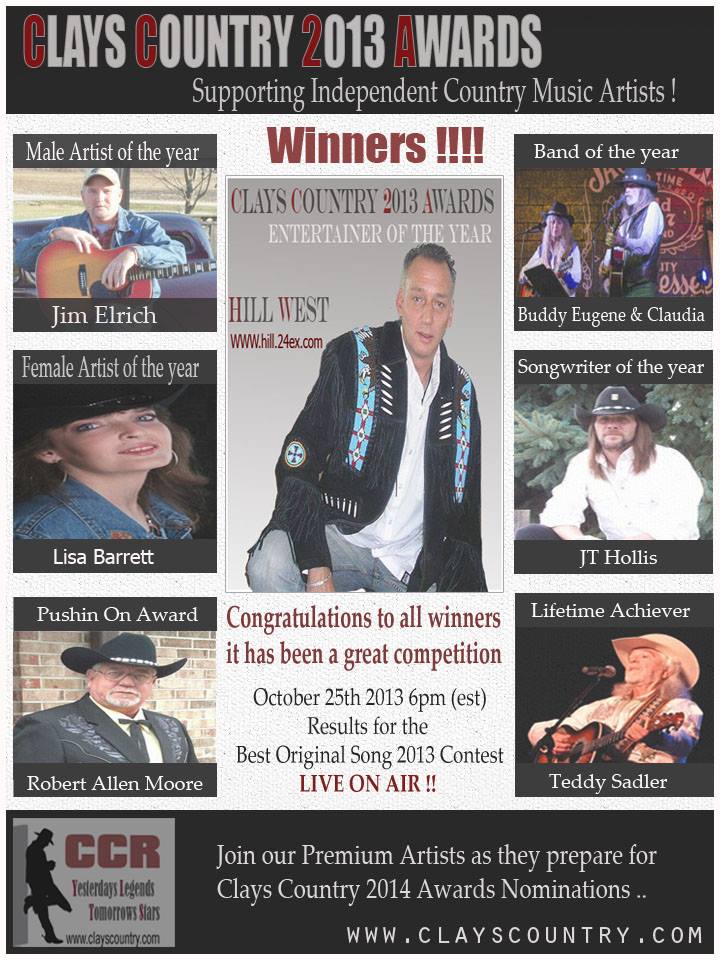 Hello Friends, I just wanted to invite you all to stop by my video Page and check out my Video "SO YOU" I hope you will all enjoy this new Video. God Bless. and Thank you.

HELP! Please tell me all the MUST Do's in Nashville...

OF COURSE the Nashville Universe Awards Show....but I have only been to Nashville 1 time, and sadly, it was a short visit...please post the MUST DO'S IN NASHVILLE....Thank you all so very much!    <3 Sara Ann

If you never try you never know. I am trying and I am starting to know and this is a good thing..:)

These and all others are available for lease Contact Me Ray Dearth if you find something that makes you feel all warm and fuzzy.

I just had a Cut released Oct.15th 2013. " I am a Southern Girl "by a new Artist Lana Franklin. You can download it at ITunes, CD Baby,Amazon ect::

Cant wait to meet every one at the show

Jimmy Stix left a comment for Polat Kurt
1 hour ago

Jimmy Stix left a comment for Matt Finch
1 hour ago

Jimmy Stix left a comment for Bennie Barnes
1 hour ago