HEY Ya'll come on out to the benefit WED DEC 5th at Red Rooster... 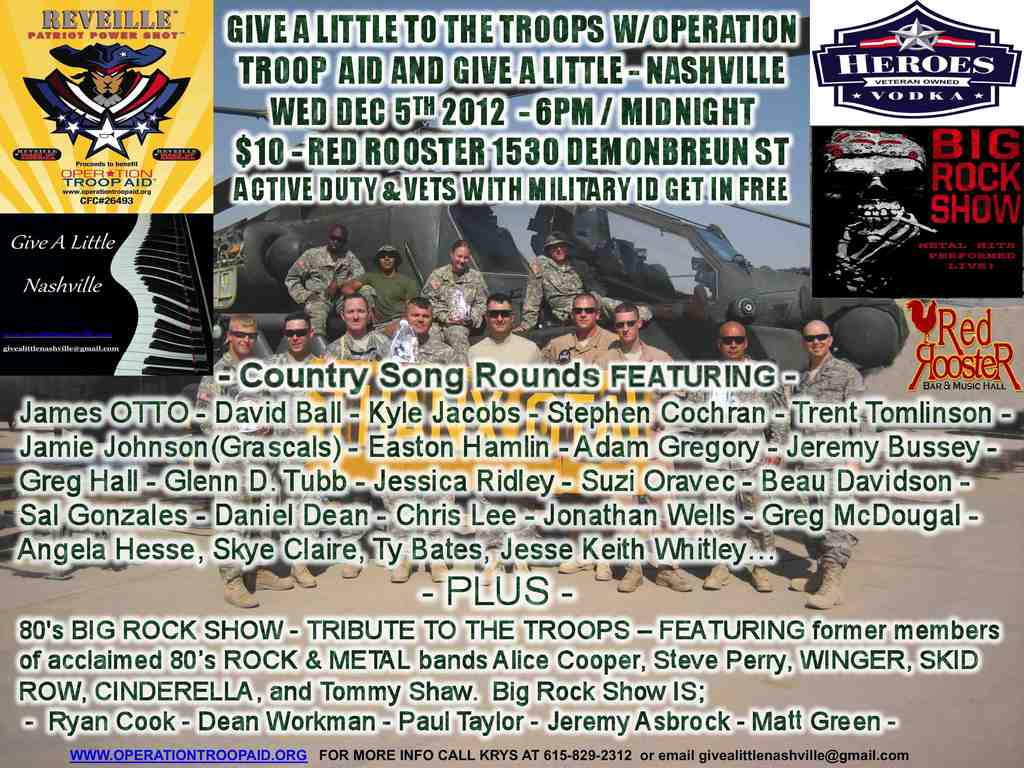 Writing up a TV show idea and sending to Manager and Producers. Idea woke me up. That is usually a very good sign. Here we go again.

FLYNNVILLE TRAIN Has Thousands Of Music Fans On Their Feet At 31st Piknik Country Festival In Mragowo, Poland

Nashville, TN (August 8, 2012) -FLYNNVILLE TRAIN kept over 5000 music fans on their feet for the duration of their high-energy, 75-minute set at the 31st Piknik Country Festival in Mragowo, Poland.  The Southern Rockers from Indiana put on their usual power show, which included "Nowhere Than Somewhere," …

RADIO EMBRACES FLYNNVILLE TRAIN'S "THE ONE YOU LOVE" - #1 Stream, #3 Download On Play MPE First Week Out

Nashville, TN (July 17, 2012) -- Radio is embracing FLYNNVILLE TRAIN's latest single, "The One You Love," making the track the #1 stream and #3 download on Play MPE its first week of release.  "It's a real departure for us," says the band's lead singer Brian Flynn. It's an honest love song that everyone can relate to.  Written by members of The…

!7 hours on set of the TV show Nashville -- what a fantastic experience. If you ever get the chance to do something like that I say go for it. You will never forget get it. All the extras I worked with were all local musicians and a bunch of great guys and girls. Thanks Nashville Universe for the hook up.

"Dirt Cheap" by Kellie Lynne Nominated Video of the Year

A must watch video that was released late October 2012 and is being aired on national television by TCN (The Country Network). The song was co-written by Luke Bryan.

Roughstock - Flynnville Train "The One You Love"

Flynnville Train "The One You Love"

“Written by the Kentucky Headhunter's Richard Young, Fred Young & Doug Phelps, "The One You Love" is a blast from the past in the sense that it is the kind of real…

Hey y'all, on behalf of myself and my incredible co-writer Rob Wile, we would like to thank all of you for our advancement into round 2 with our song Best Kiss In History.  I do apologize however for it posting twice, that is not meant to subliminally affect the voting...LOL  I am also very thankful for my nomination of Songwriter of the Year and am looking forward to what 2013 has to bring.  Special thanks to Mason Douglas for singing vocals on Best Kiss In History, since I am not the "best…

Country rockers, Flynnville Train is at it again with a new single, and a new sound. With the release of "The One You Love," these guys deliver something that leaves you begging for more and it is impossible to not hit repeat over and over again. As soon as it starts, there is no denying that, although love songs may not be something they have recorded in the past, it is something they should continue to do. "The One You Love" brings to life the fact the there is…

Very Entertaining Records is releasing Jeff Blaney's latest studio effort "Labor of Love".  The release party is happening on December 5th at The Family Wash.  Jeff will go with his band at 9:30, following Charles Butler & Associates.

It can be ordered online at Jeff's website now!

Hey everyone! I need your help! I am in the running for another competition and am currently number 4! I need you to go to the link posted and scroll down... You will see my name and it will ask you to bu

bhuvantare updated their profile
5 hours ago

Bhupendra updated their profile
8 hours ago

rakeshkumar updated their profile
9 hours ago