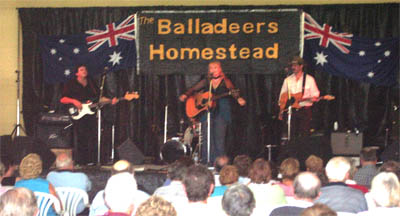 The idea to form the Association was put forward by Bluey Francis - a bush balladeer from White Cliffs NSW. The ideals of the Association are to help publicize Australian Bush Balladeers and their music to Australia and the world.

The following extracts were written by Bluey Francis on the 25/7/99 and contain early details; "To All Potential Members" …"I have reserved the name of the A.B.B.A. Australian Bush Balladeers Association with the Fair Trading Department and will be finalizing the rest of the paper work within the next couple of weeks. We have opened a bank account in the name of the A.B.B.A. using three names, Kelly Dixon, Buddy Thomson, and Bluey Francis, two signatures needed to draw from the account. We already have some early starters who have jumped the gun and are members, so come on and get your membership money in and let us get this show on the road….

The meeting to elect the very first office bearers and committee of the Australian Bush Balladeers Association, will be held at Kelly’s Drovers Camp Kitchen at the Toyota stand over the bridge at Tamworth on the day before Tamworth starts 7pm on the 20th of January. We would like any paid up members to attend this meeting. Membership will be excepted up to the start of the meeting for those who want to vote on issues put forward… Bluey Francis 25/7/99

Through the following 1999 12 month Steering Committee period, a constitution was discussed and prepared. Virginia Coad suggested the "The Balladeers" Compilation album and the Balladeers Bulletin magazine instead of a newsletter.

The name of the Balladeers Bulletin was chosen by the Steering committee. Both ideas were put in place and some Tamworth Balladeer Concerts planned and put in place for January 2000.

The "Balladeers Bulletin" put out it’s first issue in April 2000, Bluey Francis initiated the idea of the Bush Balladeer Star Quest which then commenced and more Tamworth Concerts put in place.

John Smith commented on James A. Rose's blog post Is Your Payment and Agreement Process Losing You Money?
"There are many things which are the reasons why I lose money. The first one is huge taxes. They are…"
1 hour ago

Rahime updated their profile
15 hours ago