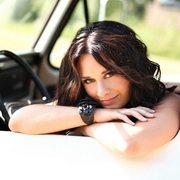 Join us this week as we welcome Country Music singer songwriter, Amber Hayes. Hailing from Weleetka, Oklahoma, Amber first broke onto the Country music scene after her starring role as Kathy Twitty in the 2008 Conway Twitty musical, It’s Only Make Believe.  Amber released her debut EP C’mon in 2010, landing two Top 40 singles (“C’mon,” “Wait”) on the national MusicRow Country Breakout chart.  In 2012, the multi-talented performer starred in the major motion picture, “Cowgirls N’ Angels.”  Three of Amber’s songs made it into the film, including her duet with Lonestar’s Richie McDonald, “Always There For Me.”  Amber’s music was also featured in four episodes of the hit CW television series, “Hart of Dixie.”  In October 2012, Amber released her sophomore album, Any Day Is A Good Day.   Most recently, Billboard’s The 615 named Amber as “One To Watch in 2013” and she opened up for one of her biggest musical influences, Reba McEntire, in Durant, Oklahoma.  Her new single, “Any Day Is A Good Day,” is the title track of her album and is at Country radio now. We will talk to Amber about her upcoming schedule, get a behind the scenes look at her music, feature her latest songs, and ask her to share her message for the troops. Please be sure to visit Amber Hayes at http://www.amberhayesmusic.com/ and spread the word. Fans are welcome to call in and chat live with Amber during the show. If you would like to participate in the live chat during the show, you must sign up on the show site first and then log in during the show. More great music for a really great cause! And as always we will give shout outs to our deployed military listeners. This is sure to be a terrific show so be sure to join us, Sunday July 14th 2013 at 4:00 PM EDT! Our message to the troops....WE do what we do, because YOU do what you do.

clarkjasmine944 updated their profile
2 hours ago