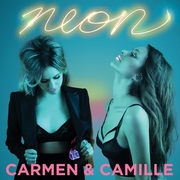 Join us this week as we welcome the pop rock band, Carmen and Camille. The twin sister duo have been practicing since childhood, experimenting with what they call “passion pop” - their trademark honesty set to catchy, dance floor hooks. Carmen & Camille’s new album NEON captures the passion, heartbreak and elation of the pop duo's desire to make their musical dreams comes true in the rough and tumble, star studded town of Los Angeles.  Just after the girls embraced their American roots and moved to the US, in a surprise twist, they found success in their native country Canada as their single Shine 4U shot up the Canadian charts and garnered them a Juno nomination (Canada's version of a Grammy). Their rising success didn’t happen overnight, as the girls had already developed a  devoted fan base through licensing with several MTV shows including The Hills which reached a worldwide audience. They were already being talked about in Billboard, Elle Girl, Stuff Mag, Seventeen and performed on one of the last episodes of MTV's Total Request Live. C&C have toured with live performances around Europe, the US and Canada and on gritty military tours in remote areas of the Middle East. We will talk to them about their upcoming schedule, get a behind the scenes look at their music, feature songs from their new album "NEON", and ask them to share their message for the troops. Please be sure to visit Carmen and Camille at http://www.carmenandcamille.com/ and spread the word. Fans are welcome to call in and speak live with with them during the show (718) 766-4193. If you would like to participate in the live chat during the show, you must sign up on the show site first and then log in during the show. Be sure to join us, Sunday 3/23/2014 at 4:00 PM EST! Our message to the troops....WE do what we do, because YOU do what you do.

RSVP for Carmen and Camille Live! to add comments!