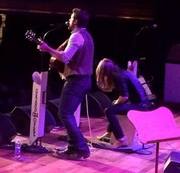 Join us this week as we welcome the Americana/Folk Rock band, Sundy Best. Hailing from Prestonsburg, KY., front porch melodies and song lyrics grown out of the rocky topsoil of Eastern Kentucky’s Appalachian Mountains intertwine Sundy Best’s roots in every song they sing. In exciting news for early 2014, Sundy Best will be releasing their brand new album "Bring Up The Sun". The new album is due for release on March 4th, 2014. In addition to recording and preparing the new album, they have been touring extensively and just completed their 2nd appearance at the Grand Ole Opry Ryman. They are currently preparing for a appearance at the Grand Old Opry House on February 14th, 2014 for Valentines Day. As Kris Bentley and Nick Jamerson join us live this week, we will discuss all the exciting details about their new album. In addition, we will feature music from their new release, catch up with all that has happened in their career since their previous appearance with us, along with their plans for the future. Also, we will ask them to share their message for the troops. Please be sure to visit Sundy Best at http://www.sundybest.net and also join their Kinfolk Movement at http://www.sundybest.net/kinfolk  Fans are welcome to call in and speak live with with them during the show (718) 766-4193. If you would like to participate in the live chat during the show, you must sign up on the show site first and then log in during the show. More great music for a really great cause! And as always we will give shout outs to our deployed military listeners. Be sure to join us, Sunday March 2nd 2014 at 4:00 PM EST! Our message to the troops....WE do what we do, because YOU do what you do.