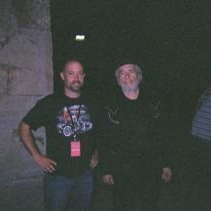 Tell us about yourself:
My name is Devon Turnbull. I am the proud father of two Lovely daughters Emma and Olivia . I am currently playing drums with The Danny Thompson band out of Brantford Ontario. The success of the band is increasing rapidly and I am looking forward to what the future holds. My music influence is a wide range from classic rock to heavy metal to country music. My heart is and will always be with Country music. I live it and breathe the country music life style every day. RIP Merle, Johnny, Waylon and George . These songs are for ever in my heart and sole !!!.

Thanks for the add!!! AWESOME PAGE!!!

Hi Devon nice to meet you

Hey Devon,  Thanks so much for the friendship :)

Thank You For Your Friendship!  ❥♫♪♫♪♫♪❥

Thank you for the friendship:)

Nice to meet you all!!


Good afternoon friends from Nashville Universe;   I would like to spread the word about Danny Thompson, Here's a bit of background on what’s been going on this past year.

Danny Thompson has penned more than 100 songs in his career and his new current single Miles & Miles has received airplay throughout the USA, many countries throughout Europe, Australia, Japan, and Canada.  Over the years Danny Thompson has landed a half a dozen songs on the USA, European and Canadian Charts.

If you are a member of Nashville Universe you can nominate Danny Thompson in the following categories and it would be appreciated very much.


MALE VOCALIST OF THE YEAR,,,,DANNY THOMPSON

RISING STAR OF THE YEAR,,,,DANNY THOMPSON

SONGWRITER OF THE YEAR,,,,,DANNY THOMPSON

Hi everyone, The nominations for the NASHVILLE UNIVERSE AWARDS have been announced. NOW IS WHEN WE REALLY NEED YOU TO VOTE AND YOU ONLY HAVE A WEEK TO DO IT. PLEASE GO HERE TO VOTE "CLICK BELOW http://thenashvilleuniverse.com/ THEN HIT THE VOTE NOW BANNER ON THE TOP OF THE PAGE. YOU HAVE TO BE A MEMBER TO VOTE IF YOU ARE NOT IT'S EASY TO JOIN, (IMPORTANT YOU MUST VOTE IN EVERY CATEGORY, If you don't know a nominee just pick one). Please VOTE for…

Good afternoon friends from Nashville Universe;   I would like to spread the word about Danny Thompson, Here's a bit of background on what’s been going on this past year.