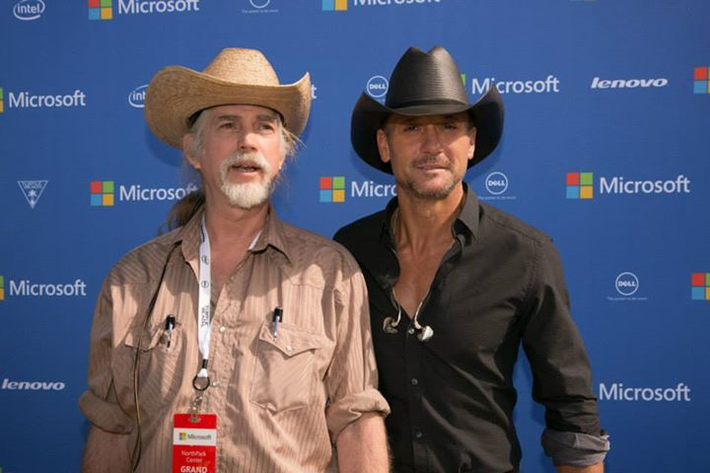 Tell us about yourself:
I first fell in love with music as a child with my mother playing the pipe organ in church.
She started teaching to play the Hammond Organ in our living room when I was 5 years old.

Thanks so much for the friend request!  :)

I am the mysterious man of the music industry.

Very few have met me in person and those are;

The Band Perry in 2005 when I had them hop a ride on a Jefferson Lines Bus that I was on just so I could get a look at them.

Kimberly was feisty and a bit upset about having to do that as I remember her complaining as the 3 of them boarded the bus and walked to the back of the bus.

She once told me that she wanted to be DONE with me so I put those 3 on the front cover of my Country Weekly magazine and told them to write the song "Done" detailing the idea from our conversation we had been having.

Aaron Tippin at a truck stop in Michigan in 2008 I think it was when his contract was up for renewal.

Frankie Ballard who came and found me in Sault Sainte Marie Michigan to tell me Thank You for giving him his recording and publishing contract.

Tim McGraw on November 8th 2014 when I had him and the Band Perry give a FREE concert for the Grand Opening of my Microsoft Store at North Park Mall in Dallas Texas.

And then there is a very Beautiful and little known song lyric writer hanging around Nashville by the name of Pam Johnston who I call Button for that cute Button nose of hers.

There have been others but ...

Many have spoken to me on the phone when I was to decide their contract. Or to help them with song ideas for their upcoming Albums or CD’s.

And then there are those whom I have rewarded with an offer of $2.5 million to write and record a song using my song lyrics and or song lyric ideas .... You know who you are.

And there are some I rewarded with an offer of $2.5 million for a specific picture of them that I wanted for my personal collection and or publication (always decent).

I was 11 going on 12 years old when I Founded UMPG and Albert Music and Albert Productions and inked a deal for Studio Time Only (NO Royalties) with Atlantic Records which I took over in 1975 after I won my counter suit against Atlantic Records. They filed suit against me because they did not like being out smarted by a 12-year-old kid.

I play several instruments and do so very poorly.

I sing but I have such a deep voice that I have been compared to Josh Turner only not that good.

I have never given up on the music that I Love.